As an indispensable steel product, steel pipes can be described as the "blood vessels" of the industry.

According to analysis and forecast, during the "14th Five-Year Plan" period, the annual demand for steel pipes in China will reach about 71 million to 76 million tons, and a large portion of this will come from the high-end manufacturing field, mainly energy pipes, precision pipe fittings for machinery manufacturing, power generation and electricity pipes, and pipes in different application industries including light industries, ship and marine engineering, automobile manufacturing, construction steel structure etc. 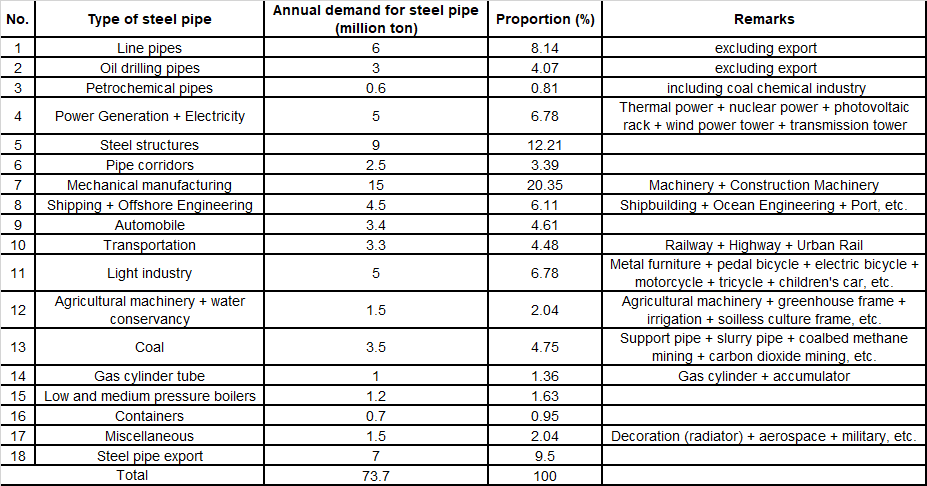 At present, China can produce almost all types of ships, and it holds the largest international market share in three major shipbuilding categories. According to the forecast of the China Shipbuilding Industry Association, the annual consumption of shipping pipes is about 3 million tons based on the annual shipbuilding completion volume of 40 million tons. The length of pipes used in a single 300,000-ton ultra-large crude carrier can reach tens of kilometers. The amount of steel pipes (including stainless steel pipes) is about 1,500 tons, while the number of pipes for a 300,000-ton ultra-large floating production storage ship (FPSO) exceeds 30,000 units, which is 2-3 times that of ships of the same tonnage.

During the "13th Five-Year Plan" period, about 2,080 berths were built (expanded) in China's ports, and about 5.2 million tons of construction steel were used, of which steel pipes accounted for about 3 million tons. It is estimated that the annual demand for steel pipes for port construction (expansion and maintenance) during the "14th Five-Year Plan" period is about 500,000 tons.

According to the "Medium and Long-Term Oil and Gas Pipeline Network Planning" issued by the National Development and Reform Commission and the National Energy Administration, the mileage of long-distance oil and gas pipelines in China will reach 240,000 kilometers in 2025, with an average annual construction of 13,000 kilometers. All the main lines of refined oil and natural gas in the provinces, municipalities and autonomous regions of the country will be connected. Cities with a population of more than 1 million are basically connected to refined oil pipelines; cities with a population of more than 500,000 are basically connected to natural gas pipelines. It is estimated that the annual demand for line pipes during the "14th Five-Year Plan" period will be around 6 million tons.

During the 14th Five-Year Plan period, green and low-carbon development has become the core work of the transformation and development of China's steel industry, and it is also the only way to achieve high-quality development, and the same is true for the steel pipe industry. In the future, the main task of the steel pipe industry is not only to increase scale, but more importantly, to increase investment in science and technology, enhance technological innovation capabilities, and create high-end green products. The 10th China International Tube Exhibition (Tube China 2022) focuses on two themes of green low-carbon and high-end intelligent manufacturing. It will be held on September 26-29, 2022, at the Shanghai New International Expo Center. We will create a trade and technology exchange platform for you, professionally serving Chinese pipe fittings and pipe processing equipment.